The Lake Wales Ridge, which stretches through Polk and two neighboring counties along the U.S. 27 corridor and contains prehistoric dunes that sometimes rise to more than 300 feet above sea level, is one of the most prominent geologic features of central Florida. It receives and deserves a lot of recognition because of its size and the large number of rare and endangered species found there.

However, Polk’s other, smaller ridges—the Bombing Range, Lake Henry, Lakeland and Winter Haven ridges–deserve notice and protection on their own.

The Lakeland Ridge, also known as the Lakeland Highlands, contains the characteristic rolling terrain found in the more scenic ridge areas in Florida with elevations ranging from 150 feet to 250 feet above sea level, similar to the elevation of many sections of the Lake Wales Ridge.

Very little of its original natural habitat remains having given way to citrus groves originally and later sprawling subdivisions. The only preserve here is Polk County’s Lakeland Highlands Scrub.

The Winter Haven Ridge, whose elevation is around 150 feet above sea level, has also been heavily developed and planted in citrus, but still contains some open spaces and publicly owned ecological features and at least one endangered species not found on the Lake Wales Ridge.

That is a rare, pink-flowered lupine that is called Scrub Lupine or McFarlin’s Lupine in honor of James Brigham McFarlin, a local botanist who collected plant specimens all over Polk in the 1920s and 1930s and was the first person known to have considered this lupine a unique species, though it was not formally described as a new species until 1982.

It is found at a state-managed site called Lake Blue Scrub near Auburndale and a federally managed site near Lake McLeod in Eagle Lake and may persist at an overgrown scrub site in southern Winter Haven owned by the City of Winter Haven.

In addition, a species of beetle previously unknown to science was discovered several years ago at the Lake Blue site and that appears to be the only place on the planet this species exists.

The Lake Henry Ridge (some references refer to the namesake lake as Lake Hendry) lies in the uplands surrounding Alturas between Fort Meade and Frostproof and contains elevations between 150 feet and 200 feet above sea level. It is occupied primarily by citrus groves and rural homesteads. Bowlegs Creek, a Peace River tributary, runs through a portion of this ridge. There are no publicly owned conservation lands here, but a small site owned by the Green Horizon Land Trust lies in the general area.

The Bombing Range Ridge lies in eastern Polk County near the Kissimmee River and Lake Kissimmee. Its elevation rises only up to around 120 feet above sea level. Some of it lies within the federally managed Avon Park Air Force Range, which is also a vast natural area. The rest is a mix of public land, existing conservation easements and some other private lands sought for preservation. 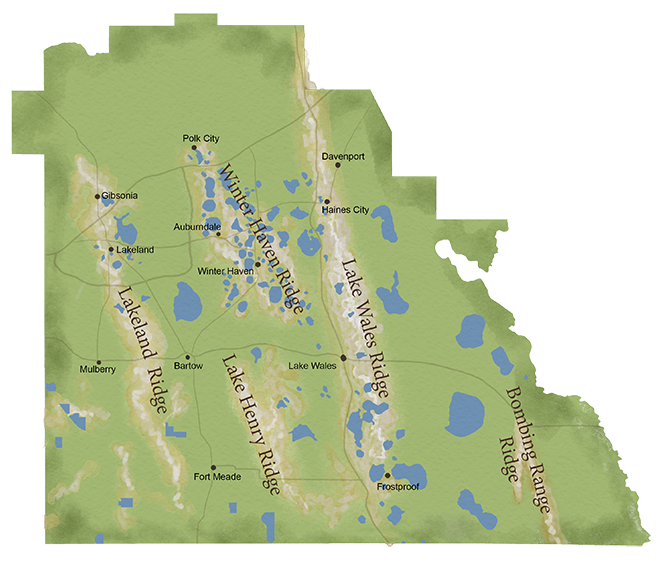 Plants of the Lake Wales Ridge

The round-headed, blue and gray Florida Scrub-Jay is the only bird species that lives exclusively in Florida, where it occurs in patches of low-growing scrub oak in sandy soils. It perches tall with its long tail hanging down or boldly hops on the ground burying acorns. This social bird forms extended family groups: the young from previous years help their parents at subsequent nests until they can get a territory of their own. Extensive development and habitat fragmentation in Florida threaten this bird’s already small population, placing it on the federal endangered species list. 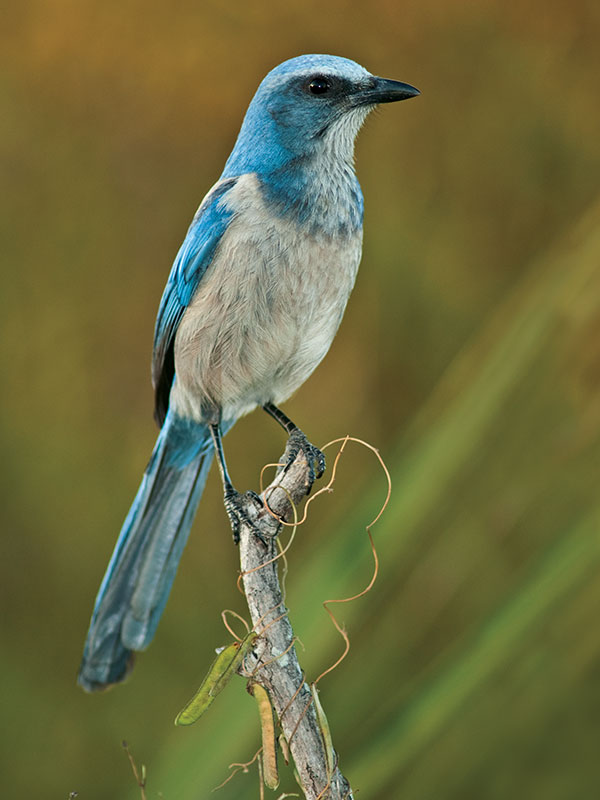 Some common birds of the Polk County Highlands

Reptiles of the Polk County Highlands